Sponsored by Noom, who also sponsored Team US for The Virgin Money South Pole Allied Challenge 2013, the Marathon des Sables is a six day multi-stage race across the formidable Sahara desert, where competitors battle against intense heat and blistering sand on a route the length of five-and-a-half marathons. As if that doesn’t sound hard enough, each runner will be carrying all their equipment (besides a tent) with them as they run, completely self-sufficient until they cross the finish line.

Now in its 28th year, the Marathon des Sables attracts some of the globe’s top ultramarathon athletes every year and is one of the highest regarded endurance events in the world. This year, five runners are entering as a team for Walking With The Wounded and are preparing to run under the scorching Moroccan sun across saltpans, up desert-mountains, through ruined towns and through the occasional sand storm in order to raise money in support of our wounded.

Ride of the Lions: The Triple Crown

After their inaugural trip to Australia in 2013, a group of British and Irish Lions have set up the Triple Crown 2014. The challenge will see 150 riders take to their bikes, cycling over almost 1000km from Twickenham Stadium in London, to the Millennium Stadium in Cardiff, to the Aviva Stadium in Dublin and finishing at Murrayfield in Edinburgh. all to raise money for Walking With The Wounded.

The Ride of the Lions began in 2013, where 600 miles of cycling between Melbourne and Sydney with the match ball culminated in a wealth of public interest and positive feedback for the team when they arrived on the day of the 3rd Test (not to mention witnessing the superb victory!). Wanting to tap into the enthusiasm surrounding the event, but not wanting to wait until 2017, The Triple Crown 2014 was born with riders splitting into teams of fifteen, each skippered by one of the ten Lions. Representatives from Walking With The Wounded will also take part and participants can even request which Lion they want to be riding with – nothing is guaranteed but early registration certainly betters the chances!

Register now to reserve your place in this epic event.

Helly Hansen Cumbrian Challenge 2014: Are You Up For The Challenge?

On 13 to 15 June 2014, Walking With The Wounded will be hosting the second Cumbrian Challenge after the sell-out success of the 2013 debut. One look at the gallery shows how popular the event was last year, and there has already been a lot of interest in 2014 as last year’s race was massively over-subscribed.

In a breathtaking new location overlooking the beautiful village of Grasmere, we have been able to double the places since last year and 200 teams of 4 will compete in an attempt to be the fastest round the circular routes. As well as this, you’ll meet and compete with members of the Walking With The Wounded Virgin Money South Pole Expedition Team so registering early is advised to avoid disappointment!

For a bit of motivation, and a taste of what is to come this year, take a look at the Cumbrian Challenge 2013 video. 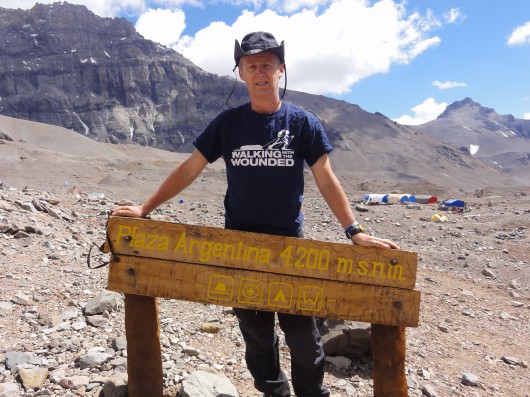 Fundraiser Of The Month: Roy Partington

Big congratulations and massive well done to our fundraiser Roy Partington for his impressive climb of the Summit of Mount Aconcagua in Argentina. At just under 7,000 metres, Mount Aconcagua is the highest mountain in the world outside the Himalayas.

He raised over £2,400 to fund the re-training and re-education of our wounded service personnel as well as making it to the summit, which is a massive achievement.

You can still support his challenge and congratulate him via a donation on his page by clicking here.